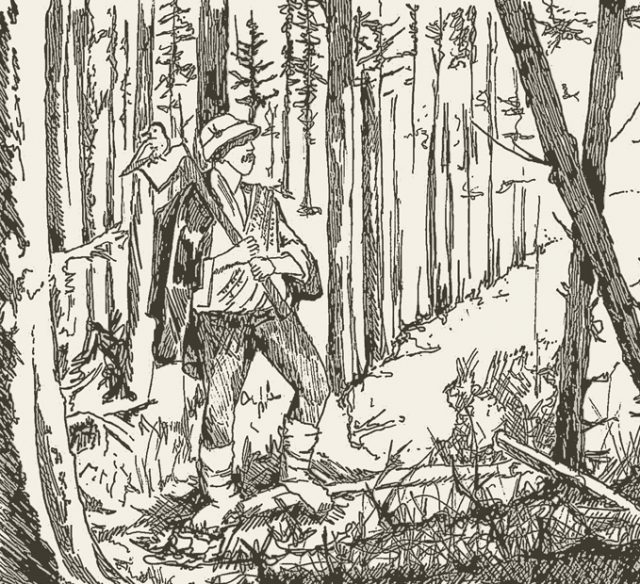 The Austrian town of Riegersburg is home not only to our state-of-the-art workshop but also to a woodcutter named Lanserring, who has been part of local folklore for centuries. This is his story…

There once lived a humble and hardworking woodcutter called Lanserring. He felled trees from morning to night, in the valley surrounding Riegersburg castle.

One day he was working in the woods when he heard somebody calling for help. He hurried in the direction of the cries until he came across a deep hole in the ground. At the bottom was a wizened old witch who had fallen in. So small was the woman, and so big the hole, that she could not escape.

‘If you help me out of this hole, you can be sure that I will one day repay your kindness,’ said the witch.

The woodcutter thought for a moment and then responded, ‘I’d gladly help you – but how can I be sure that you won’t kill me after I save your life?’

‘I’d never do such a thing,’ replied the witch indignantly. ‘Instead, if you are ever alone in the forest and find yourself in danger, I promise to defend you with my life’.

The kindly woodcutter ran to the village to collect a ladder. On his return he set the ladder down into the hole, climbed in and carried the tiny woman to safety.

The witch was worn out, so the woodcutter lay her on the ground to rest. He then picked up his axe and began to take his leave.

Suddenly, the witch sat up. ‘Not so fast, my friend! Where do you think you are going? I haven’t eaten in five days, my good sir, and I am so very hungry. What could be tastier than a handsome woodcutter?’

‘You want to eat me?’, shrieked the woodcutter, trembling with fright. ‘What about your promise? Is this the reward I get for saving your life?’

‘Stop your chattering,’ snapped the witch. ‘I am dying of hunger. Let’s walk towards the clearing, where I can make a fire.’ She began to poke him aggressively with her bony finger, directing him towards the path.

The woodcutter set down his axe and appeared to succumb to his fate. ‘How will you cook me?’ he asked.

‘I’ll boil you,’ she replied. ‘And then I’ll bake you, and then I’ll roast your fat until it is crisp.’

‘Do you know what makes the meat even more tender and sweet?’ said the woodcutter. ‘The tips of the fir tree’s spring branches.’

‘But the branches are so high and I am too tired to climb,’ replied the witch. ‘I will have to make do with salt.’

‘No!’ said the woodcutter. ‘You haven’t eaten for five whole days – you deserve a veritable feast! Let’s get the ladder and I will climb up and pick the very best branches for you.’

The witch agreed and they returned to the hole. The woodcutter leaned over and tried to remove the ladder – but, pull as he may, he couldn’t seem to shift it.

‘Witch,’ he called, ‘the ladder seems to be stuck fast in the mud. Could you climb down and give it a shove?’

The witch scrambled down the ladder, eager to get her fire burning. As soon as she reached the bottom of the hole, the woodcutter pulled out the ladder, leaving the witch stranded once again. Then he took his axe and chopped the ladder into pieces.

Brave Lanserring used guile, guts and cunning alone to outsmart the witch. It is said that he still wanders the forest, protecting villagers from hostile spirits – if you listen carefully, you might just hear the distant sound of his axe as he works.

Subscribe to keep up to date with the latest Lanserring news and views.